So, let’s get this straight – white guy with confederate flag pics shoots up a church, and we impose…

So, let's get this straight – white guy with confederate flag pics shoots up a church, and we impose a purge on any historical imagery of the confederacy.

Black guy with #BLM Â pics shoots up white cops, and "We cannot let the actions of a few define all of us"?

There is a blinding hypocrisy here, and Barry is just making it worse for everyone. Blacks are afraid of trigger happy police. Police are afraid of ambushes by #BLM Â terrorists. In the meantime, somehow, we're supposed to believe that all of this crazy is because of firearms that magically pervert normal people into racist cops, or racist terrorists.

1) inner city violence requires a police presence to manage, but it will take a cultural change on behalf of inner city residents to fix;

2) use of force by police must be scrutinized, minimized, and held to the highest standards;

3) self-defense is a natural right that should not be abridged.ï»¿

Obama urges Americans to be positive about race relations, saying ‘We’ve got a foundationâ€™ | Fox News 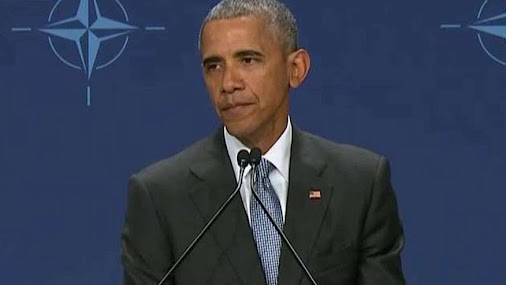 President Obama on Saturday urged Americans to remain optimistic about race relations in the immediate aftermath of two black males being fatally shot by police officers, then a gunman apparently retaliating by killing five Dallas law-enforcement officials, saying, â€œWe cannot let the actions of a few define all of us.â€